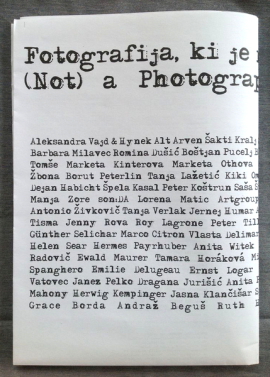 (Not) a Photograph – the exhibition

Select All and Then Delete

The first scenario involves a cursor on a white plane. This is how any text starts out, in the beginning. Emerging from a white, empty space. It is the counterpart to a nonexistent photograph -- a text that does not – or not yet -- exist. Then again, it may have existed, only to be subsequently deleted. Or it turned out to be unreadable, because it was printed white-on-white. Or it wasn’t even written in the first place, because somebody interrupted me while I was working on it or stopped me from writing it, outright. By pouring a cup of tea over my keyboard.

As the next scenario unfolds, there is still no text, but there are indications that it might exist. In lieu of the text itself, there may, for example, exist the material that was gathered with a view to featuring in the text. Roland Barthes spent two semesters lecturing on “The Preparation of the Novel” (1978-1980). Apart from the fact that he died immediately after completing these lectures, it may be conjectured that he never had any intention of writing a novel, anyway.

Or take Wolf Haas, the Austrian mystery writer, who was interviewed at length by a literary critic about his straight novel, The Weather 15 Years Ago. It was an extensive conversation, which traced all the plot elements and characterisations of the protagonists in great detail – so elaborately, in fact, that the review could easily have taken the place of the novel. If there was no novel, the conversation about it could still fill the gap. Or again, take Haus der Kälte (House of Cold, 1998), where Andrea van der Straeten simulated a complete film production, with posters being displayed in the public sphere, the press reporting comprehensively on the shooting and even on the film’s premiere – but everything was a fake. The film never existed.

Even that which does not exist needs to be given a shape, if it is to be perceived. The empty document itself needs to be allocated at least one symbol, if I want to be able to store it in my computer. The nonexistent photograph requires at least a decision, be it only the one to never have it put on display anymore. The nonexistent calls for a form of expression so it can happen. A poignant example of a spectacularly staged production of absence was Alfredo Jaar’s “Lament of the Image” at the documenta XI. Three plain textual plaques in a darkened room with examples of the disappearance of photographs segued into a room where a blindingly bright field of light had taken the place of all those extinguished, prohibited or concealed images. The nonexistent in this case deriving from a “no longer existing”. Why no photograph? Has there not been one at all, or not yet, or no longer? Perhaps it was because it has already become an intrinsic part of the medium of photography not necessarily to bring forth a picture in the first place? In its analogue form the picture is, initially, invisible, merely latently present, and only becomes a picture visible during the development process. Apart from that, the material itself is sensitive and changes with time. Plus: every photograph is dependent upon sufficient light. There’s the concept of the “negative” -- which, in linguistic terms, means “negation”, or “saying no” – the opposite of the image. In the digital sphere, we are confronted with immateriality and the latent hazard of extinguishment. This is compounded by a widespread oppositional attitude towards the immense and indistinguishable mass of already existing pictures. And parallel to the reflections on photography, the question that, in the final analysis, seeks to be answered relates to one’s own actions, or else, whether one’s actions, the materials used, the conditions of picture generation, in short, the whole process, should not perhaps also be pictured//reflected//represented in the work itself.

(Not) a Photograph – the Exhibition

A photographic enlarging apparatus, a negative, but no paper (Vlasta Delimar); sketches, notes, correspondences, but no one actually carrying out the plan (Lorena Matic); the idea for an (im)possible photograph, written down, but never realised (Andrej Tisma). Similar to Barthes’ “The Preparation of the Novel”, the preparations for a photograph cause the production process to enter into the picture. An imaginary picture will be sketched; the sketching will become the actual act of creation and eventually turn into the material. A photograph is simulated, just to start the process of coming to terms with the conditions of production. All the preliminary stages towards the picture, the preparation and production, and yay, even the presentation, can take place as usual, but, in a manner reminiscent of “the emperor’s new clothes” the thing at the centre around which everything revolves will remain fictive and immaterial.

The act of photography itself, then, represents the decisive step. Holding one’s breath, pressing the release button, the noise of the shutter, and the hopes of capturing a good picture. All the photographer’s ambition to have taken the picture of her life is mirrored in the instant where she releases the shutter (Anita Weck); at the same time this unique moment in photography (or the photograph) has thus been pushed outside of the space/time continuum to the extent that one may well put it in question altogether (Michael Spanghero). Once again, there is nothing to be seen but, instead, something to be read and listened to. The interest attaches itself to the situation surrounding the moment of life captured by the camera. In addition, Anita Witek exchanges male elements with female ones, and vice versa, while Michele Spanghero replaces visual with acoustic elements. Both approaches offer the spectator a perspective, different from the usual, onto the act of taking a photograph.

When finally a picture really does manage to exist, it does so by referring back to the nonexistent photograph: a torn-off Polaroid protective paper, but not one Polaroid anywhere to be seen (Ulay), or a wrapped-up photographic paper roll 150 meters long, that becomes an object, representing nothing, other than itself (Ewald Maurer). Then again, these photographic motifs do refer back to the procedure of chemical development, to the tools and scraps surrounding the production process, and to the individual creation on the one hand and the industrial manufacture of the mass-commodity on the other.

When the photograph no longer exists, then one will need, at the very least, a clue as to its erstwhile existence, such as a whole stack of photographs with their centres cut out, because the photographer was unhappy with the results (Hermes Payrhuber). The void here is intentional, as the motif that was to be reproduced was a white picture entitled “Void”. How could one, in the final analysis, represent “emptiness” better than by itself? Of course, “emptiness” reveals itself also if one juxtaposes it side by side with an active opposite. “Nothing” can be made quite clearly visible by being contrasted with “something”.

When the motif has already disappeared, it sometimes still leaves behind a trace. Comparable with the trace it leaves on the light-sensitive layer of the photographic paper, it leaves a temporary trace in the afterimage created inside the eye. Gazing directly into the sun, a negative ghost image will lodge itself inside our heads for several seconds, which, in abstract form, passes on the optical experiment to the spectator (Tamara Horakova).

Absence, immateriality, reflection and self-reflection are parameters, which already occupied the first generation of Conceptualists. They are once again acquiring dominance status at a time, when many analogue techniques and materials are on the wane, where thousands of JPEGs, sorted by date, find themselves stuffed into files and sub-files in our computers, and millions of JPEGs float around in cyberspace, cluttering online photographic platforms in an age where everything is being saved somewhere, like a film without end, while simultaneously much is lost, as electronic data replace original objects.

As an artistic medium, raising the issue of its own autonomy, photography increasingly poses the question of whether merely to generate a technically accurate depiction of reality can truly be the sole aim of the photographic art. Especially under Post-Modernism, photography has once again been reduced to a mere carrier of news. It cosies up to journalism and sociology. It denies its own existence, pledging its allegiance to an illustrative, unresisting, gormless, passive, obsequious and transparent language of images.

On the other hand, artistic photography keeps on seeking ever farther afield for opportunities to add something extra to the individual still photograph, and to enliven it. (I am thinking here, for example, of Hiroshi Sugimoto, who expands his exposure times to several hours, thus also relativising the cut in time.) Photography as an artistic medium will always lead us close to an extreme, stretching fixed constants and exploding existing boundaries. Each contribution to (Not) a Photograph is a metaphor for photography and doing one’s own thing, for a pictorially reflective discourse and against the traditional repertoire of motifs. And just as the contributions deal with photography, with the conditions of creation, with the preparation, realisation and failure of the photographic image, with simulation, reality and representability, finally, they also confront the fundamental question of whether there is even a need to represent anything at all. Of whether the image should not be allowed to simply fade back into the shadows. Select all and then delete.